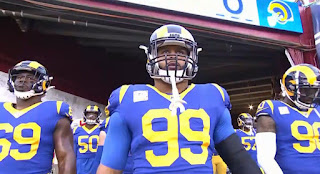 Aaron Donald had two garbage-time sacks in tonights SNF game versus the Bears (hey, they all count) which took his total to eight. It's the sixth straight season he's had 8 or more sacks.

Since 1982 only Reggie White, Derrick Thomas, and DeMarcus Ware have accomplished that feat for their first six NFL seasons. Now add Donald to that list.

There are caveats to that, however. Lawrence Taylor had 9½ sacks as a rookie in 1981 (a year prior to sacks becoming official. He had 7½ sacks in 1981, less than eight but there were only nine games played in 1982. So, he'd be on it if not for some anomalies.