No Player Was Perfect, Even the Best of the Best

UPDATED 11/29/7:15
These are the seven defensive end chosen for the All-Time Team.

Today the top 7 defensive ends out of the final 17 will be announced by the NFL as part of the NFL Top 100 team.

It is clear, we think, who the top five are—Reggie White, Bruce Smith, Deacon Jones, Gino Marchetti, and JJ Watt.

Our prediction is that Willie Davis and Howie Long will be the sixth and seventh defensive ends chosen. Strahan could edge on of these two, however. We've already opined in April why we thing Jack Youngblood won't make it. Selmon has to be hard to leave off.

When fans and even writers evaluate any player's career they focus on the positives, the All-Pros, the stats, the rings, the intangibles, longevity, the testimonials and that is the "hype". And it's great.

However, what about the other side? The negatives? Do we dare talk about them? If we don't then how can we separate players one from another in a career evaluation, i.e. 'is he worthy of All-Pro, Hal of Fame, or the NFL 100 team?

Of course, the best of the best will have far fewer "negatives" than the average, good, and vry good player but that does not mean to do not exist.

And an exercise, we'll list the negatives of the above players and perhaps a few more who were likely close to making the finalists list. And we will catch all kinds of hell for it. 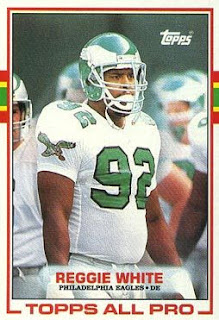 Reggie White—Took downs off, tackles we talked to said he'd make hard for a few plays and then play not so hard. But his overall success covered that up. Also, in the 1990s he got too heavy and became a far more power player than all-around power/speed guy he was in the 1980s. 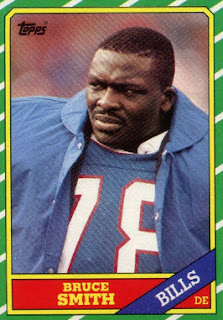 Bruce Smith—Early in career was fat and didn't play the run well. He overcame both for the 1990s was the dominant Bruce. At the end, he hung on too long and was not the 'dominant Bruce' with Washington. He wanted the sack record and he played long enough to get it. 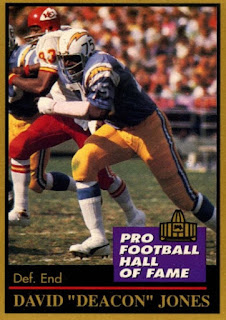 Deacon Jones—Spent his first with running around clueless, but still made plays. His second year he was getting better. His third year he thought he needed to be huge, put on weight and was not as effective as before. The from 1964-69 he had his era of dominance.  In 1970 he was ill some, was too light and got pushed around some, same in 1971 when he also had a foot injury. His football was played in that era of dominance and in the 1970s he ranged from great one week, to average the next week. Even in his prime he could be 'run at' some. Many of his tackles for loss were in backside pursuit, using his speed to catch backs going the other way. 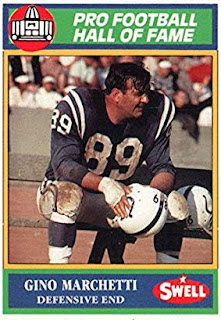 Gino Marchetti—Though not his fault he had to play offensive tackle his second year and then had injury issues for a couple of years. From 1956-64 was his 'era of dominance' and you can throw out 1966, he came back to NFL as a favor to Carroll Rosenbloom because of injuries along the defensive line. He played some end and tackle and was a shell of himself. In his prime he would take the inside move perhaps too often because he could get caught inside and blow contain. But all the great ones did that. 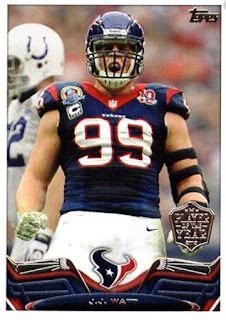 JJ Watt—Again, not his fault but when objectively evaluating a career we think durability is one of the factors, not the only one, but one of them and Watt has not been durable. He's played 32 of 64 games the last four seasons. 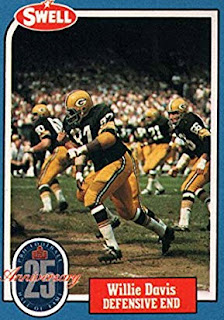 Willie Davis—Davis was a part-time defensive end as a rookie and an offensive tackle his second year (like Marchetti). His era of dominance was 1960-67. His production dropped off in his final two years and the film shows his speed was diminishing quite a bit those last 2-3 years. 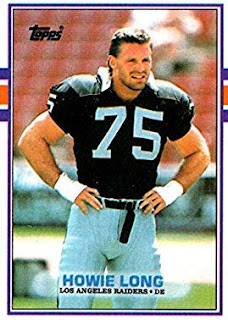 Howie Long—Poor Howie, he missed so many sacks due to poor tackling. Paul Zimmerman estimated it at 50. It was not that many but many times he did get to the quarterback first, hit him and he got away. A good number of those were cleaned up by Alzado or Pickell or Townsend, but it was a true weakness. Also, he had durability issues—he missed 22 games from 1981-91. 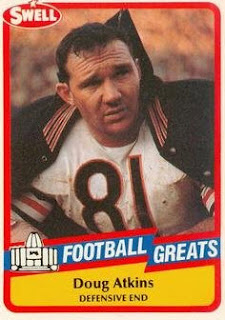 Doug Atkins—Another slow starter. He did not secure a full-time starting job until year six, though  in year three he started as well. But in years four and five he was hurt and split time at defensive end . Known to take some plays off as well. Had a dip in production in the mid-1960s and led to his finishing his career as a Saint where he had a resurgence. His era of dominance was 1957-63 and then was spotty his last few years with the Bears. 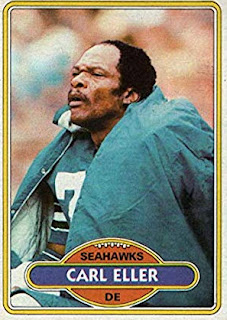 Carl Eller—Was not lighting quick off the ball early in his career. There was serious talk of Moose moving to defensive tackle early in career due to that. But once be began adopting Deacon Jones' head slap moves and getting quicker off the ball he was on his Hall of Fame career path. Late in career had an addiction to drugs, which he overcame and that's the important thing, but he admitted that $1500 a week habit affected his play late in his career. Probably hung on a couple of years too long. 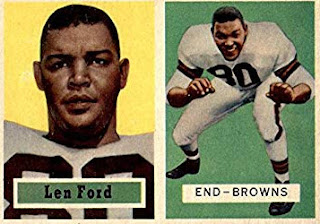 Len Ford—Was an offensive player mostly, in the AAFC, then went to the Browns in 1950 and he had a broken jaw and missed most of the season. Not his fault, but playing receiver cannot really be part of his 'defensive end legacy'. Became dominant in 1951 through 1955 and his production tailed off. Football literature of the 1960s says he had drinking issues and it affected his play. When you watch him on film you can really see the difference in play between the early 1950s and the late 1950s. Night and day. 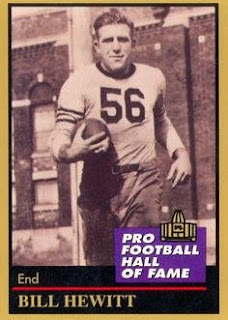 Bill Hewitt—We have only seen clips of him, not enough to evaluate. Nick Webster has found news stories about Hewitt that suggest he had tackles players for losses of over 300 yards in 1933. So it's hard to get a real career gage on him. 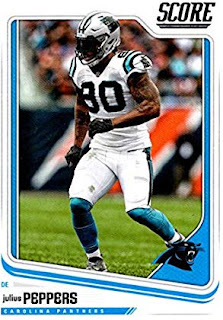 Julius Peppers—Was a rusher, an athletic skilled edge player but was never known as a top run-stuffer in the way Strahan, for example, was. Ended career as nickel rusher but would start if the regular starter went down. Was fairly effective but not what he was earlier in his career, a case of "that was then this is now" when it comes to Peppers late in his career. Great athleticism and good health allowed him to play a long time, but the tape showed that those years were just "okay". 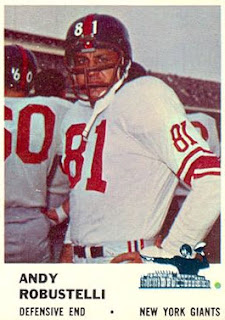 Andy Robustelli—Didn't stand out on film the way Marchetti or even Gene Brito did. But from 1959-62 or so he was fun to watch, was getting off the ball better and making a lot of plays. Dropped weight his last couple of years to keep his quickness but admitted that at "225 pounds they'd just blow me out of those holes". In our views, he was up and down with the Rams and better with the Giants. 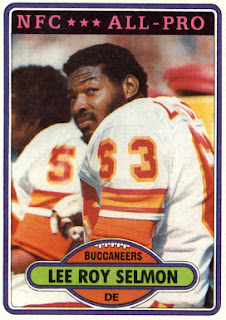 Lee Roy Selmon—The only weakness was durability he only go in nine seasons and missed games here and there throughout his career. Again, we don't blame the players who got hurt and had to retire early, we just try and reward those who played longer and were effective to the end. 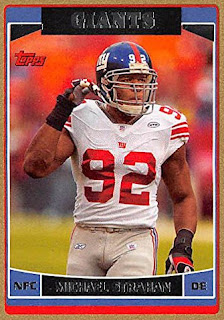 Michael Strahan—Warren Sapp said Strahan was a "failed right end". We would not go that far but it was true he began as a right end in an era where that was the premium end spot. Almost all the best tackles were left tackles and the Giants did move Strahan to the left end, where his skill set was better suited. So rather than beating tackles like Tony Boselli, Willie Roaf, Orlando Pace, Willie Jones, he beat up on Jon Runyan, Jon Jansen and the like. He also had a big of a slow start to his career. Year five was his breakout year. 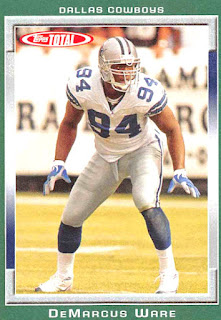 Demarcus Ware—We are not sure why he's on this list. Yes, he played as a DE, and yes he's an edge rusher but he belongs on the same list as Lawrence Taylor, Derrick Thomas, Von Miller, and so on. Whatever those guys were, that is what Ware was. 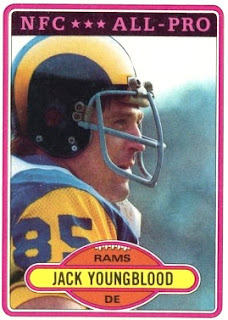 Jack Youngblood—Only started a handful of games as a rookie, but was the starter for the rest of his career. His main "knock" is the Rams could never win a Super Bowl. He would also get criticized by coaches for freelancing once in a while but all defensive ends do that. Had the benefit of playing next to Merlin Olsen the first half of his career. That was a boon to him that perhaps others didn't have. 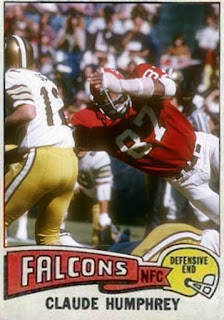 Claude Humphrey—Known as a rusher, played on some poor run-stopping teams. It was not all his fault but he was part of the unit and has to bear some responsibility. In 1978 he didn't like playing in the Falcons 3-4 defense and perhaps other issues, so he quit the team only to come back with the Eagles in 1979. Puts a bit of a stain on a career. His last couple years he was a non-starter, a designated rusher and was effective. 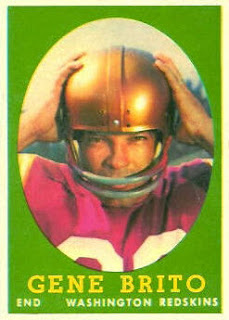 Gene Brito—Durability issues and like Len Ford played offense early in his career and had limited snaps on defense in those seasons. He also went to Canada for a season (1954) and that is not exactly "resume building" in terms of being an NFL 100 All-Time team candidate. An illness also shortened the backend of this career. 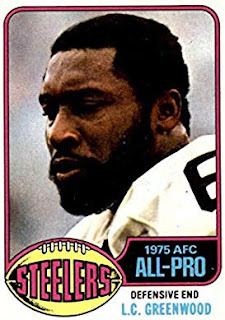 LC Greenwood—Again, some durability issues. Excellent defensive end when healthy. took a few years to start, but was an effective rotational player in 1969-70. At the end of his career could not handle the 3-4 in 1982 training camp so he hung them up. It was not his type of defense so that made sense, however, his contemporary Jack Youngblood made the transition in 1983 and played well in it for two seasons. Greenwood's effectiveness waned in 1980-81 anyway so had they stayed with the 4-3 he still may have not made the team in 1982. 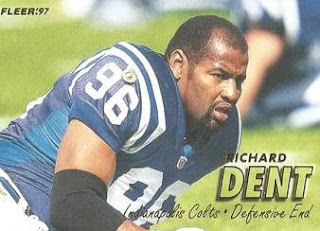 Richard Dent—Didn't start as a rookie but exploded in years two and three. Then injuries, contract disputes, disputes with the coaching staff who didn't think he was a dedicated weight lifter, not trying to get better and stronger. He also had some injuries issues. Ended his career as a designated rusher which is fine, but it's not really part of a "best of the best" resume. Maybe now it is acceptable, but then there was a 16/16/60 (16 games, 16 starts, 60 minutes) axiom and that didn't describe the end of Dent's career.

Again we are not "ripping" these guys (to use a Paul Zimmerman term) we just pointing out that when looking at a player's career in its entirety the negatives, failures, and flaws need to be at considered along with all the hype and positives. It's the only fair and logical way to separate the best of the best (or even the good from the average for that matter).

In any case, it will be fun when the final names are revealed tonight. We will stick with our predictions but also fully admit that perhaps Strahan will edge out Davis or Long. Or Hewitt. Or Selmon will make it.

We will see in a few hours.
Posted by John Turney at 5:02 AM