Was Mike Vanderjagt the Justin Tucker of 2003? 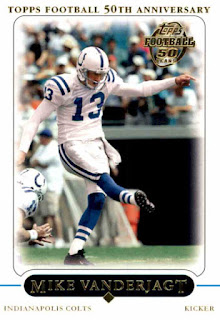 Here are the all-time leading kickers, based on field goal percentage (minimum 100 made field goals), through 2003. All charts courtesy of Pro Football Reference. 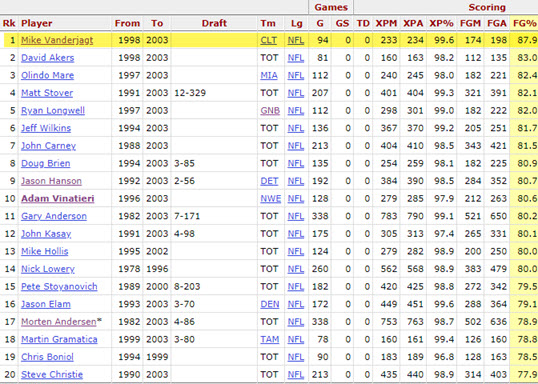 Mike Vanderjagt led everyone by almost 5%. That may not sound great but it is a significant lead.

When Jan Stenerud became qualified (after he'd hit his 100th kick) he was nine percentage points better than the next-best. By the time he retired he was 14th. By then Nick Lowery was tops. And do it goes. Kickers have been getting more accurate as time goes on.

Now, of course, Justin Tucker is the GOAT kicker but only by 2.5%.  The competition is very close and a few stumbles and the things change on the leader boards. 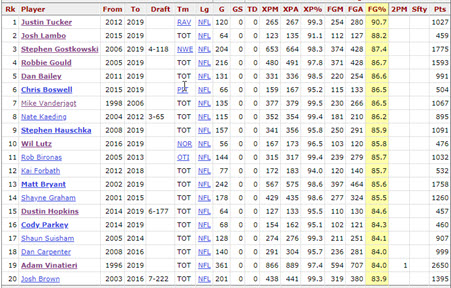 Which brings us to Mike Vanderjagt. He struggled in 2004 and fell to 87% and the competition got close. In 2005 he hit 92% of his field goal attempts but he lost his job due to missing clutch kicks.

In 2006 he kicked for Dallas and his career ended. He was still at 85.6%, first all-time, but could never find work in the NFL again. In fact, it wasn't until 2009 that his lead was overtaken by Nate Kaeding. He did have a final stint in the CFL (where he kicker before going to the NFL) in 2008.

Vanderjagt was not necessarily liked by his team. After a playoff loss in 2003, Vanderjagt ripped coach Tony Dungy and quarterback Peyton Manning. He said Dungy was too mellow and questioned Manning's leadership. Manning called him Vanderjagt an "idiot" that got "liquored up and ran his mouth." He commented on the Patriots fitness which caused Rodney Harrison to dub him Vanderjerk.

Now, if course, we are not remotely suggesting Tucke is like Vanderjagt. We are saying that one can be on top of the world in an NFL statistical category one year and in a few short years not be able to find a job.

We think Justin Tucker is the goat. However, we also know that as time goes on things change. And while kicker are flirting with 90-95% the fact there is a ceiling of 100% there is a squeezing effect on the leaderboards but there is always going to be one person atop those boards.

And it's an interesting discussion. We will see where Tucker is in 3-5 years. While we expect him to still be at or near the top, many thought the same about Vanderjagt, too.

Stats via The Football Database