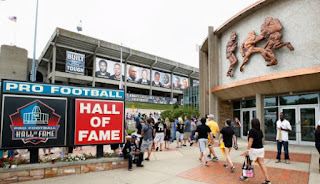 Yesterday, Pro Football Talk's Mike Florio reported that "The Hall of Fame selection committee will not vote on the 15-person centennial mega-class.".

Apparently, according to Florio who obtained a document that states that rather than the full 448-member Hall of Fame selection committee voting up or down on the 15 person Centennial Class, once the 15 people are selected they are in the Hall of Fame, with no approval of the Hall of Fame Selection Committee.

Okay, so, is this good or bad?

Florio raises valid questions. There have been rumors that one of the reasons that there are three contributor candidates is so that there would be room for former NFL Commissioner Paul Tagliabue. Of course, there is no proof of that, but Florio mentions it and I have heard it as well. If true, it's not surprising. On the Hall of Fame Board of Trustees sits Roger Goodell and a few NFL owners so looking out for one of their own makes sense.

When the process was first announced the Hall painted itself in a corner by initially announcing that the entire 15-person blue-ribbon panel nomination class would be voted on, yes or no, as a bloc, rather than individually. This, too, was rumored as a way of not having Tagliabue voted down individually by the full committee when the other 14 perhaps were voted in. Again, a rumor, not a fact.

So, with that said, the Hall seemingly rethought the process and made a big change. And there Florio kind of crushes the Hall, quite honestly. Changing a process midstream is a tough thing to defend. Really tough.

Now, to be fair, we can see this point. If the blue-ribbon panel, with major names such as Bill Belichick, Gil Brandt, Dick LeBeau, John Madden, Ozzie Newsome, Carl Peterson, Bill Polian, and Ron Wolf, work hard and cut down a list of hundreds of players, coaches, and contributors to fifteen and then it is voted down as a bloc because enough of the 48 regular Hall of Fame committee think one or two of the fifteen are unworthy it would be an insult to the big names the Hall recruited for the panel.

Why would they waster their time only to be shown up by the full committee? Just a guess they'd be none too pleased.

It would also be a major public relations disaster. Epic in proportion.

It would also be a disservice to 13- or 14 worthy nominees. How would it be if Duke Slater or a dozen or more worthy players lost their only chance for election because of a political beef purportedly with Tagliabue?

It would kind of suck.

My personal view is the Hall of Fame can do what it wants with their processes. I think it's extraordinarily odd to make a change this significant this late in the process (we expect some sort of cutdown soon, not to 15 but to maybe 20-25 or so). My wish is that the process was not so political, but it's always been that way, however, in my view much less so now than in the 1990s when I looked at the process and followed it closely.

The full committee rejecting 13 or 14 worthy players because the Hall, perhaps on the bidding of some of its trustees like Goodell or Jerry Jones or others, tried to fix the system so as to give "their guy" an inside track would stink, but if the voters did it, the principle they would be defending would be worthy. No one should get preferential treatment.

However, you can bet your bottom dollar that the Hall and the trustees would vehemently deny anyone is getting a system rigged in his favor. Again, it is only rumored that the NFL and the Hall want Tagliabue in my any means necessary. We have to go by the word of people who say they have gotten phone calls promoting the former commissioner.

The logical question to ask is does the blue-ribbon committee seem to be more pro-Tagliabue than the 48-member full committee?

Clearly, there is a ton of football knowledge on the blue-ribbon committee which does include members of the full committee. So the chances of the "fix being in" are tiny in my opinion. These are good men and women who've been tasked to do a job.

I'd be more concerned about parochial interests than anything, the kind of thing written about earlier in this post—people pushing for players they coached or played with or drafted. Sometimes, in that situation revisionist history an set in, making a player better now than when the All-Pro voters or Hall of Fame voters passed them by on the All-Pro teams or All-Decade teams, just as an example.

When you guy was All-Pro a bunch or All-Decade or a Player of the Year you lead with it. If he didn't have those you pooh-pooh it, that those things are "popularity contests" and whatnot. That game is familiar.

Honestly, this is more an interesting story than some sort of calamity.

I have every confidence that all 15 players the blue ribbon committee will be worthy. Perhaps I might squabble about one or two taking the place of another one or two I think is more worthy, but that's just opinion.

If the blue-ribbon committee does screw the pooch, I will give my opinion of it then. As of now, I am content to wait and see what happens and no prejudge the work.

Again, making a change in the process is not wise. But it's not a deadly sin either. Making the process include an all-or-nothing process, to begin with was not wise, in my opinion either. But hey, it's not my decision to make. I am just calling it as I see it.

In any event, I respect the voters on both the 48-person committee and the blue-ribbon committee. Let the process work itself out and then we will see if my faith is misplaced.

As always, I could be wrong.
Posted by John Turney at 1:49 PM