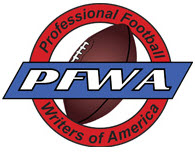 Sayers had overcome knee injuries to continue his career, which was the basis for his winning the award, but he was desirous that his teammate, suffering from cancer and undergoing cobalt treatments, be recognized for his courage.

The moment was dramatized by the film “Brian’s Song,” and it gave national recognition to the Halas Courage Award, which was relatively new at the time.
However, over the years, it has not been widely publicized, and the Pro Football Writers of America award mostly by members of the association and hardcore football fans and researchers.

So much so, that in 2010, I wrote an article for the PFRA's Coffin Corner. Since then the PFWA has done an excellent job in listing  own awards on  webpage, including the Halas Courage Awards and as such, the award is still alive and well and has honored some of the toughest players and coaches who have dealt with extraordinary difficulties.

According to the PFWA the award goes “To the player or coach who has performed with abandon despite injury or personal problems off the field”, and over the years has gone to players for what seems to be career recognition (Dan Hampton or Dick Butkus) or over a specific incident (Mike Utley’s paralysis, Sam Mills' and Mark Fields' cancer battles, Tony Dungy’s loss of a son to suicide).

Tom Dempsey was awarded for his perseverance over being born with serious birth defects. Many of the others were for overcoming serious, even career-threatening injuries or illnesses like Rolf Benirschke and Bryant Young, for example.

The 2016 winner for his 2015 performance is Eric Berry of the Chiefs for excellent play after overcoming Hodgkin’s Lymphoma. It was an outstanding choice, as are the others and there are likely many others who have won similar awards like Comeback Player of the Year awards that could have easily honored here.

This year's winner is Ryan Shazier who continues to make progress after a spinal injury he sustained late in the 2017 season.

Below is a complete list of  and it should be noted that the year listed the award and is for the previous year's performance by the player or coach.