1957 Defensive Players of the Week: Schmidt and Marchetti Lead the Way.

The 1957 season is one of the most interesting in the decade since neither defending division champion returns to the title game. Though there would be a serious discussion on the merits of many men who could have been defensive player of the year; a strong case can be made that Gino Marchetti of the contending Colts and Joe Schmidt of the contending Lions would be co-Defensive Players of the Year. 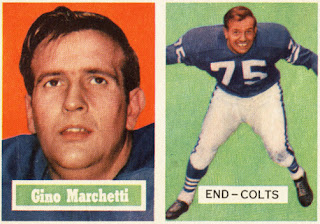 September 29th: Though the highlight film of this game shows a masterful performance by the young man directing the Colts offense in black hightops---someone must be playing defense for Baltimore and that someone is Marchetti who records at least four sacks in the game (might have been five?). 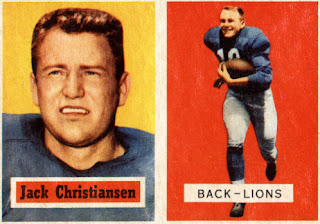 October 6th: Jack Christiansen has played well against every opponent in the western conference, yet he always makes plays against Green Bay. Lions are ahead 7-0, as the "Kentucky Babe" Parilli attempts to throw to Don McIlhenny swinging out of the backfield. Jack always alert in his zone coverage area pilfers the pigskin and races to the left corner of the end zone for the score. Detroit wins 24-14 to even their record at 1-1. Jack will go on to intercept 10 for the season and tie for the interception title. 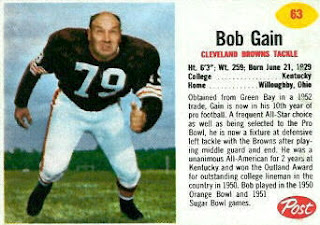 October 13th: Paul Brown was forced to endure a losing season in '56 and this season he has a powerful new runner for his offense. The Cleveland defense is also reinvigorated as the Browns use the 4-3 as a full-time defense. One of the keys to success is the play of stalwart left defensive tackle Bob Gain. Cleveland limits the Eagle rushing attack to just 63 yards as Gain continually stops Philadelphia runners in the Browns 24-7 victory. The Eagles score late on an interception return, thus the Browns defense demonstrates they are going to be a force to be reckoned with. 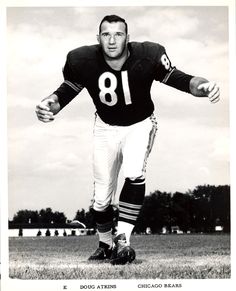 October 20th: Many Chicago Bear teams have started slowly in the past under Halas, but this is not the way Paddy Driscoll wants to defend his division title—yet at 0-3 and with a ton of talent on the roster that is where the Bears are. Enter the Rams; a team the Bears have beaten six of the last seven times they have played. The highlight footage of this game just jumps off the reel as we see athleticism all over the field by both teams.

Though there is an expectation that a website should have an accurate box score; that just does not happen with Pro Football Reference as they list the Bears with 10 sacks for 89 yards. When you have the play by plays you get an accurate scenario of what really happened when Van Brocklin and Wade dropped back in the pass pocket.
Jack Hoffman records 3 sacks for 37 yards from his left defensive end position, while Doug Atkins has finally come into his own at right defensive end and records 2 sacks for 35yards. Watching him blow into the Ram backfield is an awesome sight for the Bear fans in Wrigley. Chicago goes on to a 34-26 win as rookie Willie Galimore is the offensive standout, but Hoffman & Atkins are our co-Defensive Players of the Week. Oh yeah, before I go on; the Bears defense recorded 60 sacks for 479 yards during the year. 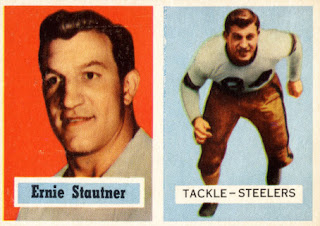 October 27th: Ernie Stautner has played hard every down every week in his career. Durable (has missed only two games in his career thus far), tenacious, and with a mean streak a mile wide he punishes every Philadelphia Eagle blocker all afternoon in the Steelers 6-0 victory. Philadelphia gains but 71 yards rushing on 31 attempts as the new Steelers under Buddy Parker really believe they are contenders in the eastern division. Stautner will again earn a pro bowl berth; his fifth. 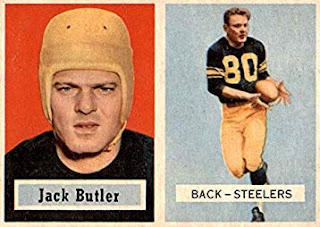 November 3rd: Another Pittsburgh Steeler as defensive player of the week you ask? You betcha, as right safety Jack Butler purloins three Baltimore Colt passes in the 19-13 win. John Unitas had thrown for 982 yards and 14 touchdowns in the first five games of the year, but not today as #80 ranges far and wide to stop Colt drives. Butler will tie for the interception title with 10 for the season. 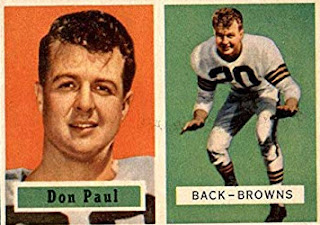 November 10th: Right corner Don Paul has made many stellar defensive plays on pass defense in his career for the Browns, yet today he dashes 89 yards for a touchdown with a Pittsburgh fumble in the 24-0 win to stay ahead of their arch-rivals in the standings. 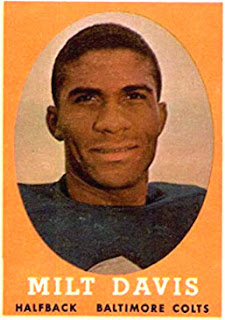 November 17th: Though Don Shula battled valiantly as the starting right corner for the Colts he lacked the athleticism and speed needed to excel at this demanding position. Enter Milt Davis. The youngster had played just one game with the Lions before coming east, and early in the year, he has played well. Now with a record of 4-3, the Colts can ill afford a loss on the road in Chicago.

Zeke Bratkowski zips a pass towards Harlon Hill near the left sideline as Davis darts in front of the all-league receiver and intercepts. Davis strides down the right sideline for 74 yards before Galimore knocks the ball from his grasp out of bounds. The Bears battle back, and actually take the lead at 14-13, but Davis reads Bratkowski's ill-advised wide side out throw in the 4th quarter and weaves his way 47 yards to score as Baltimore wins 29-14. Davis has just set a record with the most yards ever gained returning interceptions in a game, and for the season he also will tie for the interception title with 10. Baltimore has now won back to back games on the road for the first time since they re-entered the league in '53! 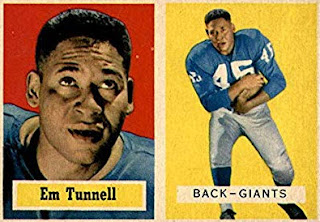 November 24th: Emlen Tunnell is in his 10th season and already has intercepted more passes than any other player in league history. He has intercepted twice earlier in the year including a 52 yard score against the Packers, but today the old magic is back as Tunnell steals three Cardinal passes in a key 28-21 win over the Cardinals. He will again be voted to the pro bowl; his 8th.

WEEK TEN
December 1st: The San Francisco 49ers have a superb defensive coach in Phil Bengston, but lack the talent of other teams on defense—and as such finish dead last in total defense for the year. Today though coach Phil has a masterful gameplan to limit the Lombardi offense in Yankee Stadium. The Niners red dog almost every down, yes, almost EVERY down. Chuckin' Charley Conerly is avalanched in the pass pocket all afternoon and keeps fumbling. Right linebacker Matt Hazeltine records two sacks, and a fumble recovery, while left linebacker Marv Matuszak recovers two fumbles in the 27-17 win to keep San Francisco in contention in the West. 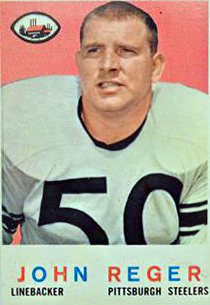 December 7th: The New York Giants have gained 605 yards rushing in their last four games, and must win today to remain in contention with Cleveland. The Giants gain just 66 yards on the ground on 27 attempts as right linebacker John Reger earns the Defensive Player of the Week award. As an undrafted rookie in '55 Reger recovered five fumbles, and this year he will tie teammate Gary Glick for the league lead in this department; again with five. John puts the Steelers on the scoreboard first with his 14-yard touchdown run with a fumble as Pittsburgh knocks New York out of the division race 12-7. 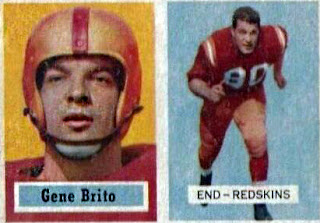 December 15th: The Washington Redskins will close out the '57 season with three consecutive victories, and today in the 10-3 win over Pittsburgh left defensive end Gene Brito records 3½ sacks as the 'Skins go on the warpath every time the Steelers have the ball. Brito will return to the pro bowl for the 4th time. 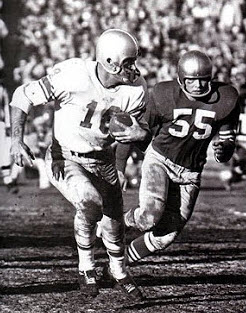 December 22nd: One of the best rivalries of the '50s has been San Francisco and Detroit. In the last 14 regular season meetings, the Niners have won eight and scored an average of 28 points, while in the six losses they have averaged just 13 points. Today for the first time since 1952 we have a divisional playoff since these two teams tied atop of the west at 8-4. Shelby Strother's book "The Top 40" details this game, and you just might want to get yourself a copy.

The captains meet at midfield: St.Clair & Nomellini for the 49ers, and Joe Schmidt for the Lions—you might have heard of these guys? San Francisco dominates play as they gain over 200 yards in the first half and lead 24-7. Kezar has just a wall separating the two locker rooms, and Strother quotes Lion players as they overhear the Niners celebrating.

The King breaks lose for 71 yards on a sweep right to begin the second half but does not score a touchdown. The field goal increases the lead, yet here comes Detroit as the offense begins to click, and Joe Schmidt as he has done so many times in his career leading his pride of Lions on defense. Detroit has taken a 4th quarter lead 28-27, and San Francisco is backed up near their own goal line with first and 10 on the 13. Joe Perry falls on Tittle's fumble for a loss, and then on second and seventeen Tittle is hurried and Schmidt from his middle linebacker post drifts in front of Conner to intercept. Joe returns to the 49er two-yard line. Though some of you may think that kicking a field goal to go ahead 31-27 is not that important?

The complexion of the game is changed dramatically with two minutes remaining—a field goal which would have given San Francisco the lead would now be meaningless, thus Detroit now controls the tempo and Tittle is again harassed into an interception as the Lions advance to the title game against Cleveland.
Posted by TJ Troup at 10:50 AM