Running Back Skill Set, Circa 1970s 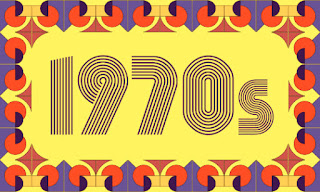 Running backs for decades were first and foremost the men who accepted handoffs from their quarterbacks, then ran with the ball through an open hole in the line of scrimmage. They also blocked regularly for their backfield mates. Running a pass pattern out of the backfield was strictly a “sometimes” thing for running backs of the past.

That all changed during the 1970s, and for the most part, the era of “pure runners” has vanished from the NFL landscape. Today, the running game rarely gets anywhere near the attention that it received decades ago. Just look at how many more passing attempts are shown on the box scores each Monday morning. Few are the quarterbacks around the league who are not attempting at least 40 passes in every game these days. In the 1970s, if a quarterback was throwing the ball 40 times, it was usually due to desperation, as his team was probably many points behind in any one particular contest.
What happened in the 1970s that caused running backs to become pass targets more so than pure runners? The origins came from an unlikely source. In 1973, the Houston Oilers were mired in the midst of four straight seasons of losing records, the last two of which produced only one win each year. Houston quarterback had virtually no pass protection, but he did have some talented passing targets, including a world-class sprinter at wide receiver in Ken Burrough. But Dan Pastorini seldom had the time to stand back in the pocket to look for more than his first two reads, before he would be forced to tuck the ball into his side and run to avoid a sack. What would Pastorini do? 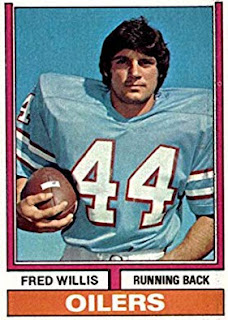 The answer came in the form of a teammate in his offensive backfield. Fred Willis was a young ball carrier out of Boston College. In the team’s 1973 training camp, head coach Sid Gilman and Dan Pastorini both noticed that Willis was not really a superstar runner, but he did possess the innate ability to catch passes.

Pastorini started to throw the ball to Willis coming out of the backfield. Willis started catching those short passes, and before you knew it, he ended up leading the American Football Conference in pass receptions in 1973 with 57 catches worth 371 yards. Willis thus became the first running back in the modern era of pro football to accomplish this feat.
Willis’ achievement was just the beginning, however. Coaches across the NFL realized that despite Houston’s losing record, a quarterback could succeed by primarily throwing short passes to a running back. The goal of imitating the Oilers’ offensive success was now at the forefront of many teams’ plan. Yes, it would be great if every team could obtain a group of outstanding pass blockers on their offensive lines, but minus that, it was assumed that all they really needed was one decent running back who could catch passes. It was relatively common knowledge that most running backs could outrun most linebackers in a man-to-man coverage situation, both in the 1970s and the current day and age. You catch the ball and make one linebacker miss, and you could gain a lot of yardage. 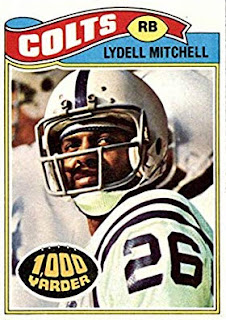 It did not take long for a wealth of teams to respond to that challenge, and they did so throughout most of the 1970s. The year after Willis’ conference record of pass receptions, another running back would go on to lead another losing AFC team in pass receptions. But Lydell Mitchell of the Baltimore Colts did Fred Willis one better, as he would go on to lead the entire NFL in pass catches in 1974 with the grand total of 72 receptions, worth 544 yards. Mitchell shared a college backfield at Penn State with the great Franco Harris, and most scouts presumed that Mitchell might have a better pro career. That prediction did not pan out, but Mitchell proved that he was a pretty good pro player, nonetheless. Indeed, he was one of the few highlights visible for the 2-12 Colts in 1974.
“You play hard and you practice hard all of your life and you’re naturally happy when you reach goals you’ve set,” Mitchell expressed.  “I caressed that moment.  It was something that I worked toward and it happened.  It was a fantastic feeling.” 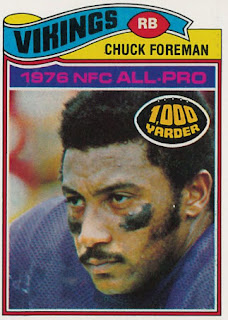 The 1975 season would see yet another running back lead the NFL in pass receptions. But unlike Lydell Mitchell, Chuck Foreman of the Minnesota Vikings played for a winning team. The Norsemen accumulated 12 victories in 1975, and there was no mistaking Foreman as his team’s most dynamic offensive performer. He caught 73 passes worth 691 yards and scored an incredible 22 touchdowns (combined rushing and receiving) in a 14-game schedule. By this stage of Minnesota quarterback Fran Tarkenton’s 18-year pro career, he had already begun to focus his attention to throwing the ball shorter distances. His yardage totals certainly did not suffer with this decision, however, because a shifty, fluid, and elusive runner like Foreman could often catch a short pass and turn it into 20- or 30-yard gain.
“I don’t know a better pass receiving running back,” said Tarkenton when describing Foreman.  “He has sure hands, runs his patterns well and has a feel for adjusting that I can anticipate.” 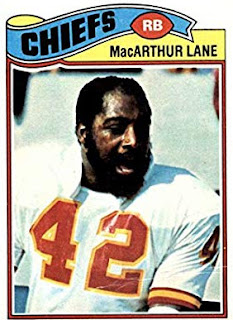 This “running back turned into receiver trend” was by this time more than just a coincidence.  And that was proven beyond all doubt the following year, when a journeyman rusher by the name of MacArthur Lane led the entire league in receptions. Lane caught 66 passes in 1976 worth 686 yards for the Kansas City Chiefs, his third team.  One big difference between Lane and backs like Willis, Mitchell and Foreman, however, was that Lane was primarily a power back, built to be bullish on surges through the line of scrimmage. But he was also blessed with two very dependable hands.  Lane would go on to catch 287 passes throughout his 11-year pro career.
The remainder of the decade of the 1970s would see more running backs lead the NFL in pass receptions. In 1977, Lydell Mitchell was still playing for the Baltimore Colts, but by this time, they had become a perennial AFC playoff contender. Mitchell once again caught the most passes in the league in ’77 with 71 receptions, worth 620 yards. Baltimore also had a strong-armed quarterback in Bert Jones, and a couple of fast and dependable wide receivers in Roger Carr and Glenn Doughty.  Added to all those weapons was Mitchell, who constantly confounded opposing defenses, because they never knew when he would be leaving the offensive backfield as a primary receiver, or just as a decoy for the Colts. But it was Mitchell’s success at catching passes which helped to force opposing defenses to make strategical adjustments.
“Deep zones have been the reason for more teams throwing to their backs,” analyzed Mitchell.  “They (the opposing defenses) have to give you something; they can’t cut off everything.  So they give you the short pass to the backs.” 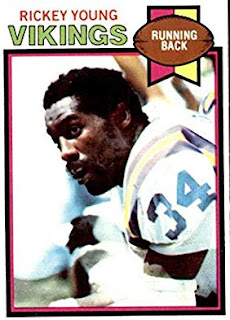 Two more years remained in the decade of the 1970s, and in both 1978 and 1979, running backs continued to lead the entire NFL in pass receptions. Minnesota’s Rickey Young successfully followed in the footsteps of Chuck Foreman in 1978 when he claimed the top spot in the league’s receptions category with an incredible 88 catches worth 704 yards.  At that time, 88 pass receptions were the most ever for a running back. 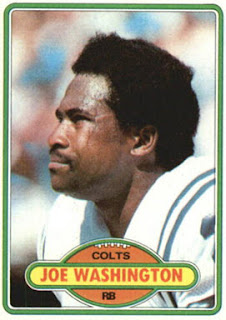 “Most of my catches came on broken plays,” admitted Young. “And with receivers like Sammy White and Ahmad Rashad around, you know that I’m not ever going to get double-teamed.”
The following year, Joe Washington replaced Lydell Mitchell in Baltimore and led the NFL in pass receptions with 82 catches, worth 750 yards. Neither Young nor Washington were expected to be superstars, but both proved to be explosive weapons for their respective offenses. Washington’s exploits were remarkable, considering how poorly the Colts played throughout 1979. Baltimore could only earn five wins in 1979.
Eventually, more wide receivers would lead the NFL in pass receptions in successive decades, with larger statistical numbers. But the advent and the most prosperous period of utilizing running backs as a team’s primary passing targets began and succeeded in the 1970s. That was when running backs across the NFL expanded their skill sets.

Pro Football Journal Note: Joe Zagorski has two more books coming out later this year.  The Year the Packers Came Back: Green Bay’s 1972 Resurgence and America’s Trailblazing Middle Linebacker: The Story of NFL Hall of Famer Willie Lanier will both be available for purchase by this Christmas.