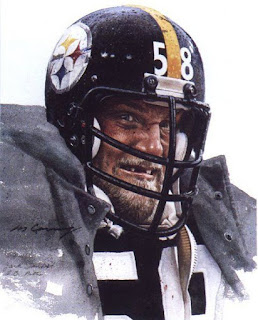 As mentioned in our previous post the rule changes of 1978 et al,  made a difference in scoring in the NFL, in moving the ball (yards) and in some other ways.

And here are the top defensive performances from 1973-77, the five seasons previous to the 1978 rule changes. It's pretty clear the dead ball era (great defensive era) was over. 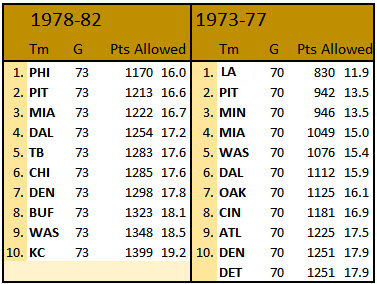 As can be seen, the top teams allowed 3-4 fewer points a game. The Steelers were second from 73-77 and also second from 1978-82 but it was a field goal more per game allowed by Lambert and the Curtain. 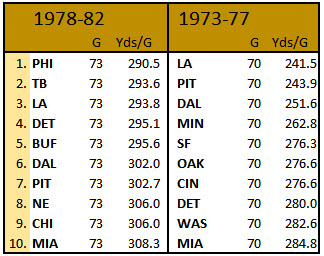 The Steelers kept up their run defense, they were third in yards rushing allowed per game from 73-77 and first from 1978-82. In this case, the difference in numbers was not notable. 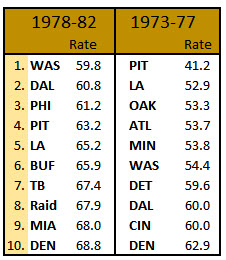 This was a big jump and the Steelers and their amazing 41.2 from 73-77 was something that just couldn't be duplicated with the new rules. The Steelers still did well, ranking fourth after being first in their previous five years. 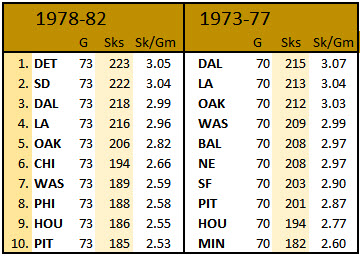 No real change in sacks per game among the leaders. Sacks per game for the Steel Curtain went from eighth to 10th and the difference was less than a ½ sack per game. 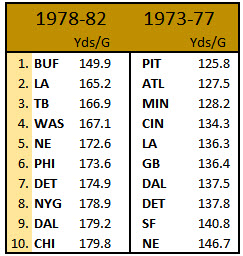 Here is one of the biggest jumps, the Steelers were first with 125.8 and the next leader was at just under 150 yards a game and it can be seen that other ranks were much higher in the later five-year period.

It's clear the passing numbers really jumped as did points, but the sacks and run stopping (fronts) didn't change much. The NFL, defensively, was becoming a coverage league rather than a front league and that trend has continued to this day.