Best Receiver of Each of the Decades

Recently we did a series of posts detailing who we think were the top players in each decade and each mid-decade (beginning and ending in the middle of a decade). They can be found HERE.

Now, here are the receivers, (ends, tight ends, wide receivers all grouped together). We begin with 1935-45, the first full "decade" that receiving stats were available. 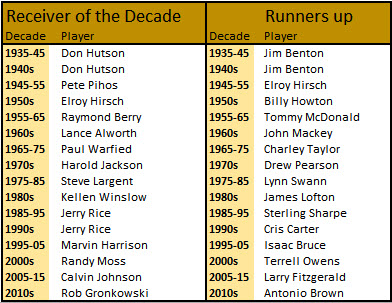 Don Hutson was so far ahead of the game it was ridiculous. Jim Benton was the only guy close and there was a big gap between him and Hutson. Perhaps Benton deserves a long look for the Centennial Class of the Hall of Fame.

Pete Pihos, who was also a fine defense end was the next consistently great receiver. He was an end, usually tight, but all of the ends back then were.

The 1950s was tough because there were guys who flashed and then disappeared. Hirsch was fairly consistent, but he had one MVP-type year then nothing else close. Billy Howton had two monster years then little else close

Lance Alworth was an easy choice for the 1960s. John Mackey was the next-most impactful receiver of that decade.

Harold Jackson does not get a lot of love, but from 1969-81 he led the NFL in receptions, yards, touchdowns and was fifth in yards per catch. He also led the NFL from 1970-79 in same categories. Drew Pearson was a big-play receiver from his rookie year to the end.

Steve Largent was excellent every year from 1975-85. Lynn Swann's skills were a big part of the Steelers offense and were key to their wins. He had a short prime (career ended after 1982) but his impact was felt—especially in Super Bowls X, XIII, and XIV.

For the 1980s the biggest deal was Kellen Winslow who changed the game as part of Air Coryell. Again, another player who had injuries cut into production but we go by impact and peak performance not just stats. James Lofton takes the next spot, he was a throwback to the deep receivers of the 1950s-70s.

Jerry Rice dominates from mid-1980s through the 1990s. Sterling Sharpe and Cris Carter back him up, but they were not that close.

For the mid-90s to mid-00s Marvin Harrison takes the top slot and we are going with Ike Bruce behind him though Terrell Owens and Randy Moss are qualified. Ike's ring helped make the decision.

Megatron was the "next great thing" and he's number one from 2005-15 and his runner up was Larry Fitzgerald.

For the 2010s the receiver with the most impact was tight end Rob Gronkowski and Antonio Brown us next. Julio Jones is an honorable mention and is very close to Brown but Brown's numbers exceed Jones by enough to make a difference. However, since there is one year left in the 2010s we reserve the right to change if Jones has a monster year and maybe Brown disappoints.
Posted by John Turney at 1:41 AM