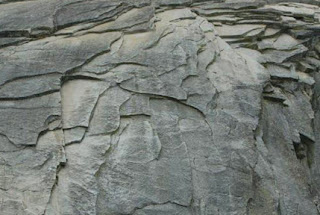 This is part five of our serious on teams who stepped up their run defense from one year to another.

Troup on the '63 Raiders:
Researching a team for a single season without the benefit of a ton of film to digest is a real challenge, yet the 1963 Oakland Raiders are sure worth the time and effort. Just wish I had more film of them from both the disaster of 1962 and the amazing success story of '63. This narrative is dedicated to two loyal and steadfast Raider fans in John Richards (PFRA member and distinguished artist) & Chris Barlow (of NFL Films).

The 1962 Raiders allowed 2,440 yards rushing, and in their only victory they allowed just 82; thus an average of 173 yards a game in those thirteen losses. Al Davis must address both the challenges of putting together a staff and re-vitalizing the roster. Bill Wise in the Pro Football Almanac states "perhaps the best endorsement for the AFL is how Oakland can look forward to the future with vi-gah.

Their existence defies the economic tenets of Adam Smith. The Raiders have been for three years the poor orphans of the Bay area, playing most recently in a makeshift stadium, with makeshift players under makeshift coaching". Al Davis in his maiden voyage as a head coach at the pro level is not MAKESHIFT.

He has a vision, and one of the key components is having men who can teach—thus enter Tom Dahms who had played with distinction as an offensive lineman with the Los Angeles Rams. Dahms takes on the task of rebuilding and teaching the defensive line. 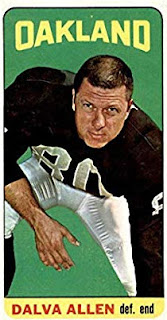 Dalva Allen and Jon Jelacic return as the defensive ends but switch sides with Allen playing so well at left defensive end he receives All-Pro mention. The rangy duo hold their own against drive blocks and are able in pursuit. 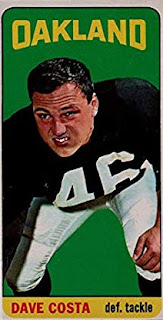 Chuck McMurtry plays both tackle posts, yet more at left d-tackle. Rookie Dave Costa is in consideration for rookie of the year, and also plays both spots. Their back-up who receives plenty of playing time is Jim Norris. All three men are strong factors in stopping the run.

Davis knew how the linebacker position is to be played by watching Faulkner and Noll teach the Charger linebackers. The issue is simple; mobility. Bob Dougherty starts the beginning of the year at left linebacker as he has the past three years, yet he is replaced by former middle linebacker Jackie Simpson. Exhibiting toughness and tackling ability Simpson is a marked improvement. 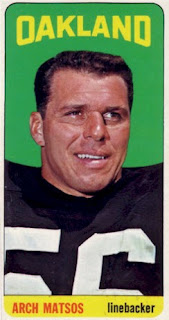 Davis made waves in trading for Art Powell, yet his trade for former all-league middle linebacker Archie Matsos is the key to the season. Undersized (6-0, 217), yet quick, savvy, and a can't miss open field tackler who thrives on being in the right place the right time Archie is chosen First-team All-AFL.

Clancy Osborne could not keep a starting outside linebacker job with either the 49ers or Vikings, but he sure does the job for Oakland. His pursuit skills are a key factor in stopping the run all year. No one except Davis believed Osborne could do the job, and Clancy sure does. Osborne is backed up by undersized Charlie Rieves. The second-year man gets plenty of playing time, and he also is quick, and a fine tackler.

Tommy Morrow at right safety sets a pro football record that still stands as he intercepts in eight consecutive games. His forte is pass defense, yet he is an able tackler. Since Morrow is not near the factor in run defense; the left safety must be, and Mr. Davis acquires former Redskin Joe Krakoski. He plays so well he receives some All-AFL recognition as he plays the strong side sweep as well as anyone in the AFL. 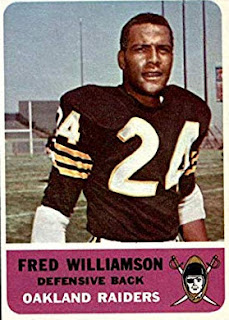 The left corner is consensus All-AFL Fred Williamson, and he is not only a fine pass defender, he believes he is the "Hammer" in stopping the man with the ball in his tracks.

Six games into the year the Raiders are 2-4, but in the loss to the Jets is one of the key plays of the year. New York has the ball on the Raider thirty-seven on 4th and 2 to go. Simpson and Matsos stop the run and give the Raiders a chance in the 10-7 loss. This would have never happened in 1962. Oakland wins four straight, and to a man the Raiders not only know they will record a winning season, they believe they can catch the Chargers and win the west.

On the road in Denver Costa & McMurtry cause a fumble that Jelacic scoops up and runs 19 yards for a touchdown. The Raider run defense not only stops the run (17 Bronco first-half rushing yards, and only 12 second-half rushing yards), they score also. Oakland will finish the year at home for the final three games, and the first opponent is San Diego.

Paul Lowe is a 1,000-yard rusher for the season, but today he carries 4 times for zero yards in the first half and gains 5 yards on 2 carries in the 2nd half. None the less San Diego has built up a 27-10 lead until the Raiders score 31 unanswered to win. Oakland closes out the year with two more wins to finish 10-4. The Raiders allowed 1,488 yards rushing in '63 (an improvement of a whopping 952 yards) and they cut the yards per carry from 5.1 to 4.0. Each year the Silver & Black improve to become a dominant AFL team by the end of the decade.

Turney on the '81 Giants:
Sometimes the answer for dramatic improvement is obvious. The 1981 Giants are such an example. In 1980 the Giants allowed 2,507 rushing yards (4.3 avg) and 31 rushing touchdowns. That's the very definition of a sieve.

The defensive coordinator was Ralph Hawkins who had played in the NFL and coached in the AFL before working for George Allen from 1971-77 and became the coordinator for the Giants in 1979 and immediately converted the Giants from a 4-3 scheme to a 3-4.  He and Ray Perkins (not sure which—or both?) hired a young assistant from who was in Denver in 1978 named Bill Belichick to coach the linebackers.

That first year, 1979, the run defense marginally improved. Harry Carson had perhaps his best-ever season and Brad Van Pelt transition from a SAM in a 4-3 to a solid strong-side 3-4 'backer.

John Mendenhall gave the nose the old college try but was not suited for a 3-4 scheme and in 1980 was replaced by a powerhouse rookie named Curtis McGriff. However, for whatever reason, the run defense got worse in 1980 with McGriff in the middle.

Harry Carson missed eight games, six in the middle of the season and then the final two games and  Joe McLaughlin stepped in for him and he was average at best. So Carson being out was a big part of the issue in 1980, but not the only one.

Brian Kelly was 6-3, 230 and also was hurt and missed all but two games. He'd been solid for years on the Giants defense as both an outside and middle linebacker.  He was replaced by John Skorupan a former Bill who was tough but lacked any kind of athleticism in 1980 (his last in the NFL).

The left inside backer in 1979 was Dan Lloyd who was diagnosed in March of 1980 with cancer of the lymph nodes. He'd begun treatment for it and was out of football indefinitely. (He did try to come back in the USFL in 1983 after being declared cured by doctors and he's alive and well today).

His replacement was Frank Marion who was essentially a career backup. And he got injured. So did McLaughlin and Skorupan.

So, the replacements for injured players were being replaced.  In all five rookies started a total of 16 games for the Giants in 1980. Names like Mike Whittington, Kervin Wyatt, Kevin Turner, Phil Cancik, and Ben Apuna were showing up in the starting lineups. Wyatt and Apuna never played in the NFL after 1980. Turner's only NFL start was with the Giants in 1980, two of the three NFL starts Cancik came in 1980 and all seven of Whittington's NFL career NFL starts came that year.

Someone may need to ask Bill Belichick if 1980 was his biggest NFL challenge. We would but getting access for mainstream writers is tough enough. As a blogger, it's even harder than that but we'd love to ask Bill B. about what he and Coordinator Hawkins had to do toe even field a linebacking corps that year.

The bigger question is how they even competed at all late in the season and why the defensive rushing numbers were not worse. The Giants allowed only 55 more rushing yards in 1980 than they did in 1979 when everyone was healthy. To be fair, though, they did allow more than double the rushing touchdowns and the rushing yards per attempt went from 4.0 to 4.3, an increase, but not terrible given the circumstances.

Fairly or not, Hawkins was dismissed and the Giants brought in a young linebackers coach from the Patriots named Bill Parcells to run the defense. He wisely keeps Bill Belichick as his right-hand man and linebackers coach.

To their infinite wisdom, they drafted Lawrence Taylor with the second pick of the 1981 NFL draft and installed him at the right outside linebacker position. A healthy Brian Kelly was moved to inside linebacker and Carson stayed healthy all season. That crew became known as the "Crunch Bunch" 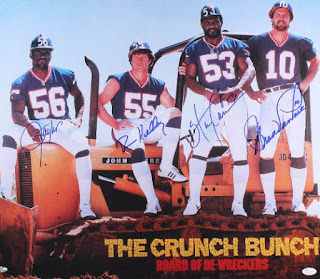 On the line, Curtis McGriff moved to left end and began his reign as one of the best-ever two-gap ends ever. He couldn't rush the passer to save his life but he couldn't be moved and wasn't going to be run at. The previous starter, George Martin, became a third-down rusher and logged about 10 sacks (though he did start late in the season when Gary Jeter went down).

Bill Neill was a rookie out of Pitt and he won the nose tackle position and did well (he was backed up by Jim Burt who got some snaps) as did Phil Tabor pretty good backup lineman would could play on the nose or end or even as a tackle in the 40 nickel when they tried that.

Parcells also made another key move. Beasley Reece had been the Giants strong safety for a few years and was pretty good. Parcells, though, wanted a more stout strong sider so he brought in Bill Currier to play there and moved Reece to free safety.

Currier was a starter in Houston for Bum Phillips and was certainly no star but he could tackle and had smarts. He'd lost his job to a more athletic player, Vernon Perry, and then he went to the Patriots in 1980, where Parcells was coaching the linebackers. Currier was a solid special teams player but couldn't compete for playing with the Patriots troika of safeties—all of whom were all excellent.

With the Crunch Bunch linebacking, McGriff and Neill toiling on the line and "yak strong" Jeter, and solid tackler Bill Currier all relatively healthy the Giants cut 616 yards from their 1980 total (to 1,891 yards) and cut the yards per attempt from 4.3 to 3.4 and the 31 touchdowns allowed in 1980 was cut to 10 and the Giants and with the help of AP Defensive Player of the Year Lawrence Taylor their increased their sacks from 28 to 44. Most importantly (remember Bill Belichick cares about points, not yards) the Giants allowed 168 fewer points (425 to 257) in 1981 than the previous season.

Certainly, the excellent up front helped the secondary (Mark Haynes went from an average rookie to an All-Pro second-year player) as the Giants cut their defensive passer rating 81.4 to 68.1.