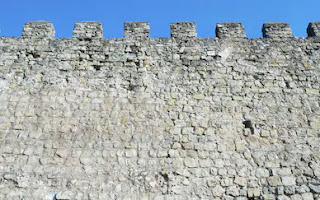 Welcome to part six of an ongoing discussion of defenses that improved their run defense in a big way from one year to the next.

Troup on the St. Louis Cardinals of 1966:
The contending Cardinals of 1963 & '64 are predicted to finish second in the Eastern Conference in '65, and after a fast start fade badly to finish 5-9. The opening statement for '65 in Street & Smiths is as follows: "Splendid balance both on offense and defense, plus capable depth at every position, has been the trademark of teams coached by Wally Lemm in the last three years."

The Cardinals defensive depth in 1965 was just not there, so let's take a quick look at the write-up in 1966 Street & Smiths shall we? "Too many times the Cardinals have been over-rated. Yes, they some very good players, but they also have some ordinary players."

Charley Winner leaves the Colts were he served a long successful apprenticeship and this is his first chance to be a head coach. The line-up is much the same up front with one notable exception, and he is one of the reasons for the Cardinals success in stopping the run.

Chuck Walker is undeniably the most impressive new starting defensive tackle in the league and earns a Pro Bowl berth. He is strong, quick for his size, and sheds blocks very well at his right defensive tackle post. Sam Silas had gone to the Pro Bowl after the '65 campaign, and he is adequate in '66, and since he is just not the same player----rookie Dave Long gets plenty of playing time.

Don Brumm gives a strong effort at right defensive end, and Joe Robb at left defensive end heads to Los Angeles for the Pro Bowl for his performance in '66.

Meinert fills all the gaps and still is a strong tackler. The veteran might not be the fastest, but that is not a factor on wide run plays do to the expertise of the two starting safeties. 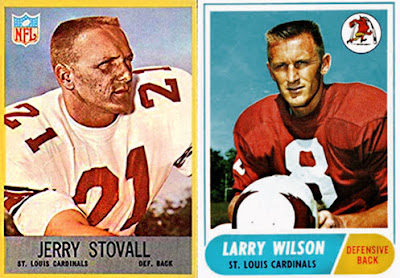 Jerry Stovall missed some playing time in '65 due to injury, but he is an every down player in '66 and he also heads to Los Angeles for the Pro Bowl. He plays the wide side run very well. Larry Wilson in his seventh season has the experience, savvy, and attitude needed to be the premier run-stopping free safety. Everyone noted his incredible courage in '65 when he played game-changing football against Pittsburgh with two broken hands. The square-jawed lean defender from Utah missed the final four games of the '65 campaign (Cardinals lost them all).

So much has been written about his pass defense feats in '66 yet he also played the run with savage effectiveness. He is always in position to make the tackle. Six weeks into the season the Cardinals are undefeated and have allowed 626 yards rushing.

One of the victories is over the Browns in Cleveland and this is the only game where the Cardinal defenders struggle. LeRoy Kelly gains over 100 yards rushing, but the Cardinals score 34 to win.

Film study shows that Dick Schafrath had an outstanding day against Don Brumm, and Kelly ran more plays to the left side. His biggest gain, however, is on a sweep right with the guard pulling. Kelly darts inside the block and makes Stallings, Stovall, Fischer, and Wilson miss—then jets off to score on a 57-yard touchdown run.

Issues on offense cost the Cardinals the division title as they go 3-5 the last eight games of the season, but the St. Louis run defense was even better the down the stretch as opponents gained just 566 yards (70 a game) on 205 carries, and as such the Cardinals improve by 621 yards in run defense.

The first step was Dan Reeves let Joe Collier, the Broncos long-term defensive coordinator go and hired Wade Phillips. Phillips ran a 3-4 like Collier but he was known for more blitzing and a more aggressive style. 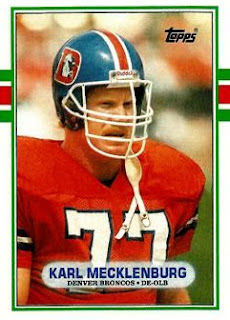 In 1988 Karl Mecklenburg missed almost half the season, so that didn't help. He was healthy in 1989 and played well enough to be All-Pro (after missing it the previous two seasons). In 1989 he was the weakside (MO) linebacker for Phillips. Previously, for Collier, he was the strong side inside 'backer in their base defense and then he would rush from the right end or sometimes right tackle in pass defense schemes.

The weak outside linebacker was Simon Fletcher. Like Mecklenburg, he moved from the strong to the weak side in 1989. He was never known as a run stopper, but he had good movement as was an excellent pass rusher (he'd usually play left defensive end in passing situations and Mecklenburg would usually play right defensive end in those situations). So, a move to the weak side made sense for Phillips.

Rick Dennison and Jim Ryan were the weak side of the linebacking corps in 1988 and they were average if that. They were smart and active but undersized. Ryan was around 220, he may have been the smallest outside linebacker in the NFL in the 1980s. He also was the Bronco signal caller after Gradishar retired until he retired himself.

Dennison held onto his job in 1989 and did play better than he did in 1988. In 1989 he played the strong side when Mecklenburg was out and moved back to the weak ILB spot after that, so he did play both inside 'backer spots. 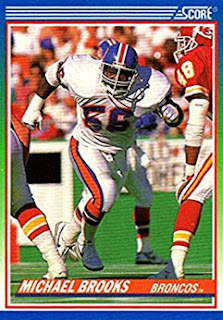 Ryan was out of the NFL in 1989 and was replaced by Michael Brooks in the lineup but on the opposite side as Ryan. Brooks was a Bronco backup for a couple of years as he was healing up from a college knee injury and he was ready to roll as a starter in 1989. Phillips inserted him into strongside outside linebacker position. Brooks was very dynamic and had terrific range and was a very good tackler. He was a big upgrade over Ryan.

Together the linebackers flowed to the ball as the linemen would sometimes two-gap but more often would slant and stunt to confuse the blocking scheme. Phillips made up for a lack of size up front by using movement, something he still does to this day.

Speaking of the linemen—Walt Bowyer was the left end in 1988 and he was essentially a career backup and became the starter by attrition. At the nose, they had Greg Kragen who was a smaller, active-type nose, not a big bruiser. He relied on stunts and movement to make plays and he could do it fairly well. He'd become the starter in 1986 and was getting better, but if teams ran right at him, he could be moved and teams could get yards.

Andre Townsend, like Kragen, kept his job from 1988 to 1989, at least for a while. He was solid at best but benefitted from the Phillips defense. Bowyer didn't. He was better against the run that the pass. Ron Holmes was nicked up early in the season. The Broncos traded a fourth-round pick to the Buccaneers for Holmes (where he'd been a disappointment as a first-rounder in 1984) Holmes finished the least at right end and played the best football of his career in that stretch. He would sink to right defensive tackle in the sub (nickel, dime, 7-DB) schemes.

Another disappointing 1984 first-round pick was acquired by the Broncos via Plan B free agency. It was Alphonso Carreker, a 6-6, 270-pound player, who was often nicked by injuries with the Packers who drafted him. However, he was able to stop the run with healthy, using long arms and reach to fend off blockers. In 1989 he was the left end for the Broncos and would play inside in nickel/dime, rushing as a defensive tackle like Holmes did. 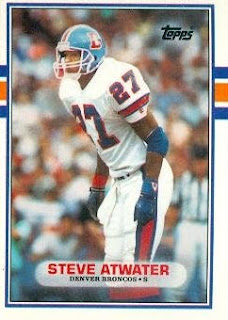 Last but not least, not the least by a long shot was the addition of rookie Steve Atwater. Atwater was the free safety and Dennis Smith was the strong safety, though they both played both techniques.

Atwater was 6-3, 220, and was a vicious hitter and tackler. He played closer to the line of scrimmage as much (if not more) than any free safety in the NFL in help in run support. Smith was a better athlete, he was 6-3, 205, and even though he was 30, he could still run. He was a great tackler and also a major hitter.

Left corner Tyrone Braxton took over at left corner for Mark Haynes who became the nickle (essentially these two swapped positions). Braxton was a smaller (5-11, 185) corner but was fiesty and would come up in "cloud" coverages and support the run in the tradition of Gary Green and Pat Thomas).

In the first seven games of the season, this new iteration of the Broncos defense allowed just 89.2 yards rushing a game. Then, in week eight, the Eagles (Phillips' former team) hung 215 yards on them, though Randall Cunningham had something to do with that.

The last eight games they rebounded to allow just 92.5 yards a game and the season total was 98.8.

The Broncos made it to the Super Bowl and got blown out, it's true but the accomplishment of cutting nearly 1,000 rushing from the run defense is no small matter, one of the best improvements ever and Wade Phillips and Atwater and Brooks and Mecklenburg deserve credit for it.

Next up part VII
Posted by John Turney at 12:51 PM