The 2000s All-Decade team was well selected, though we have a couple of quibbles.

First, here is the official team: 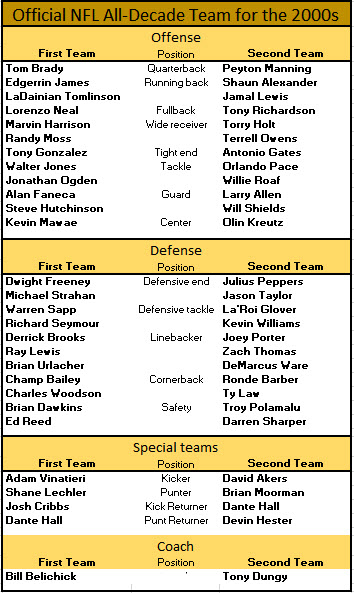 At quarterback, we understand the pick of Tom Brady, and it's okay to go that way but we would have gone with Peyton Manning over Brady for several reasons. We certainly thing the "rings" matter. A lot. But so do other things. And with Brady not starting in 2000 as a rookie and missing 2008 due to injury, he's two seasons down from the jump. Manning had one ring, Brady three and that gives Brady a bit of an edge there.

But Manning got the "honors" the MVPs, the All-Pros and he was the stat king of the 2000s. So, we would have Manning first, Brady as Second-team.

For peak value, we'd have considered Priest Holmes or Clinton Portis over Jamal Lewis on the Second-team. The fullbacks, receivers and tight ends are all good picks and in the proper order in our view.

We get the pick of Faneca, the writers don't always check with scouts and Faneca has the honors, but Larry Allen was the better player even though he played eight years. Brian Waters had a better decade than Will Shields and we'd have gone with him instead of Shields.

Some may think Jeff Saturday should have had at least a Second-team bid, but Olin Kruetz is fine as well and we'd stick with him.

Willie Anderson had a better decade (more "blue" seasons) than some of the more well-known tackles but he always gets left out.

Michael Strahan and Richard Seymour would have been our First-team ends. Jason Taylor would be on the Second-team with Julius Peppers.

However the voters put Seymour on the First-team at tackle, so at least he got the full honor. He was usually a 5-tech on running downs (end) and a 3-tech (tackle) on passing downs.

One first-team defensive tackle would be Kevin Williams and our sleeper would be shade tackle Shaun Rogers. He had 55.5 run stuffs and 37.5 sacks and blocked 16 kicks. He only went to three Pro Bowls, however. But we think he got shorted by two or three.

The committee nailed the corners and the safeties.

The most accurate kicker of the decade was Nate Kaeding (87.2) and Matt Stover (87.1) but it's hard to criticize the selection of Adam Vinatieri  (83.0 15th) due to his clutch kicking. David Akers (82.7, 17th) went to four Pro Bowls, the most of any kicker in the decade. Jason Hanson and Jason Elam had excellent range. There are a lot of ways to go so we can live with who the selection committee went with.

At punter, we'd go with Mike Scifres who had a 39.0 net average. His gross was about three yards less than Shane Lechler but we prefer net combined with touchback to inside-the-20 ratio (Scifres 4.9. Lechler 2.0) and other metrics. Scifres' net was higher than Lechler's because he was more able to place the ball and not allow big runbacks. Moorman is a good Second-team selection, though Matt Turk would be good as well as the Second-teamer.

Dante Hall edging Devin Hester is okay because Hester only played three seasons in the 2000s. He's more fitting for a 2005-15 All-Decade team. Hall returned six punts for scores and Hester returned an amazing seven touchdowns in three seasons. The leader in yards per return for the decade is Roscoe Parrish at 12.3 and Antwaan Randle El returned five for scores, good for third place in the decade.

At kick returner, the committee went with Josh Cribbs on the First-team and Dante Hall on the Second-team. And we concur. Cribbs took back eight picks and Hall six.  We'd add Larry Izzo as a special teamer followed by Sean Morey, though there are others worthy as well especially Brendon Ayanbadejo and Kassim Osgood.

We put Ayanbadejo and Osgood on our 2005-15 All-Decade Team but though Izzo was deserving here as was Morey. We should give honorable mentions to Steve Gleason and David Tyree as well. Both were excellent in the decade of the 2000s.

So, there is our critique. Let us know your critiques of us.
Posted by John Turney at 4:38 PM