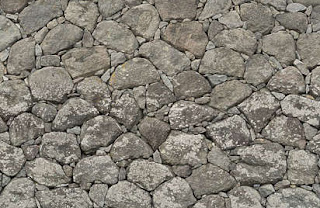 Welcome to the fourth discussion of improved run defenses.

Here we go . . . The Chicago Cardinals rarely played strong defense during the decade of the 1950's, yet during the woeful 1959 season, there was an improvement on the defensive side of the ball.

Moving south to St. Louis for 1960 there will not be many changes overall to the personnel, yet a dramatic improvement as the Cardinals lead the league in defense overall and post a winning season.

Let's take a closer look, shall we? 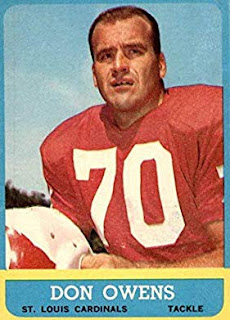 Don Owens replaces Culpepper at d-tackle and plays stout football, while the transition to replace Carl Brettschneider at left linebacker is filled by young Ted Bates (he proved he was not a middle linebacker in '59). Frank Fuller plays outstanding at right defensive tackle, while Luke Owens is a load to block at right defensive end. 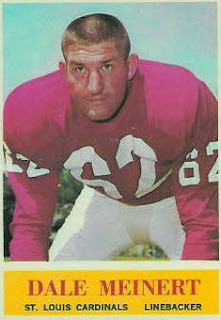 Dale Meinert is the main reason St. Louis is so much improved in stopping the run as he plays like he was born to play the position of middle linebacker.  He's strong at the point of attack, and excellent at scraping the "C" gap—he is also rock solid in pursuit. 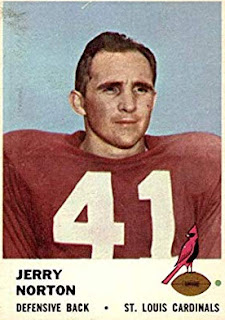 Norton started the first three games of '59 at right safety, then had a Pro Bowl season as the left safety. John Roach is listed as the starter at left safety, and he did start the first three games, then rarely sees the field—oops? And DOUBLE OOPS! The starting right corner is quick tough Jimmy Hill (he is not listed by the site?), while Billy Stacy starts most of the year at right safety which is listed correctly. 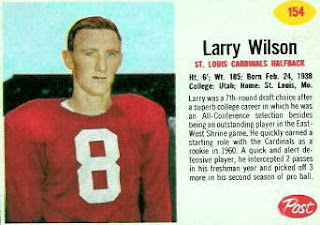 Hill returns to his right corner post in '60, and Stacy is the nominal starter at left corner with the trade of Lane to Detroit. Run support from the safety post is paramount in strong successful run defense, and the Cardinals have Norton in his All-Pro year at left safety, and rookie Larry Wilson at right safety.

Even as a rookie Wilson demonstrated that he was gonna be a factor in stopping the run. Fearless, tough, and a fierce tackler—he and Meinert are the keys to success in 1960. The Cardinals could not beat Cleveland as the Browns gained 305 yards. The man himself Jim Brown pounded out 305 of those yards on 52 attempts to move the chains and keep the ball.

Turney on the 1974 Patriots:
Chuck Fairbanks was hired as the Patriots in 1973 as their head coach, he'd been a great NCAA coach at  Oklahoma winning three Big 8 championships. A more modern comparison might be that of Jimmy Johnson who was hired to be the Dallas Cowboys head coach in 1989. The comparison is that they both brought college defensive schemes to the NFL that became en vogue shortly thereafter and they both knew the college game, it's players and how to draft well.

Johnson brought the "Miami 4-3" to the NFL a scheme that often stacks all three linebackers and uses over and under fronts. Though there were elements of that in the NFL before Johnson, after the Cowboys success in 1992 and 1993 they were adopted all over the NFL.

Fairbanks in his first draft selected John Hannah, Sam Cunningham, Ray Hamilton, and Darryl Stingley all excellent with Hannah being awesome. So, like Johnson, he knew talent.

Fairbanks, in 1973, wanted to run the 3-4 or "Okie" defense. It had been run in the NFL, particularly the AFL for a while but no one committed to it as their usual base defense, it was more like a changeup or situational defense for most, if not all teams. Some did use it more than others like the mid-1960s Bills and Chargers and Chiefs and others. 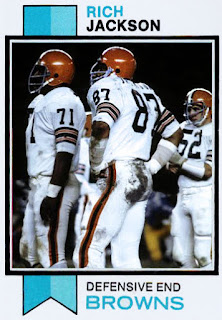 In 1973 Fairbanks ran it some but didn't have the personnel to do it fulltime in that initial season. He tried to get Rich Jackson to please come to Boston and play nose tackle for him. Jackson's knees were shot but his power and strength were not. So, his days as a defensive end were over but Fairbanks knew Jackson could be a great nose. Jackson agreed and said he'd play for Fairbanks if he could do it as a player-coach. Jackson was an education major in college and was ready to get on to the next phase of his life, even if it meant playing a few years more in the NFL.

Fairbanks didn't want to do it that way so no deal was struck. So, in 1973, without the foundational piece he needed the Patriots played the 4-3 defense. 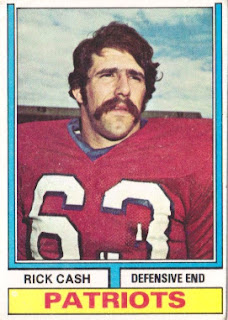 The Pats run defense was bad in 1972 (2717 yards and a 5.0 yards per carry average) and a bit worse in 1973 (2,850 and a 5.1 average). Fairbanks would watch the films with his defensive coaches and marvel how bad Rick Cash was at right defensive end. Fairbanks had to replace him. 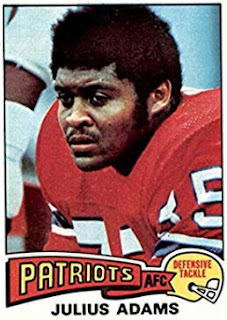 At the left end was promising rookie Ray Hamilton who was too short for end, but and too small for a 4-3 tackle. One tackle was Dave Rowe who should have been a better run stuffer due to his being 6-7 and 290 or so pounds. Julius Adams had shown promise in 1971 but kept getting moved from tackle to end to tackle and regressed from his rookie season.

Steve Kiner was a solid athlete but just didn't play well in 1973. He was excellent in 1971 but then got hurt and missed the 1972 season and he just wasn't up to snuff in '73 possibly due to not being 100% physically.

The Mike 'backer in 1973 was Edgar Chandler a journeyman at best. And at weak 'backer Ron Acks roamed. Acks was 6-2 and listed at 214 but that was probably with a 5-lb weight on his jock. he was just too small to start in the NFL because he didn't have the compensatory speed to make up for it.

So that was the from seven crew that played the Patriots 4-3 defense in 1973.

So, in 1974 Fairbanks begins his drive to run the 3-4 defense. He drafted Steve Nelson and Sam Hunt two collegians who knew how to play the Okie. Edgar Chandler is now out of the NFL though he found work in the WFL.

Nelson missed some time due to injury buy was still All-Rookie and made 77 tackles. Sam Hunt, a short, stout (6-1, 245) linebacker was excellent, filling holes and even picking off three passes. Not bad for someone who was not always on the field on passing downs and a 15th round "hunch". 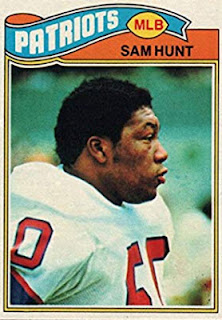 Kiner is traded to Houston (where he regains his abilities and starts for several years as an ILBer for them). To replace him the Patriots send a late-round draft pick to the Steelers for George Webster.

Webster was a dominant outside linebacker for the Oilers in the late-1960s before he blew out a knee. He was compared to Bobby Bell. However, he never recovered to his previous self after that. In 1972 the Steelers took a flier on him and he backed up Jack Ham and Andy Russell in 1973. The thought was that as Russell was long in the tooth that eventually Ham would move to the weak side (Russell's spot) and a rejuvenated Webster would take over the left side where he was dominant with the Oilers.

Well, it didn't work out that way. So, now Fairbanks had his left outside linebacker. Webster played well and even flashed some in 1974 looking better than he had anytime since his knee injury.

Ron Acks hung around long enough to be a camp body but was cut in September. The right outside linebacker job was earned by Steve King, a college standup end who was small (6-4, 215) and slow and undrafted but who worked his way into 232 pounds as a rookie backup and special teamer in 1973. King was by no means an All-star but he was solid, knowing his keys and responsibilities and with his newfound size, he was no weak sister.

Ray "Sugar Bear" Hamilton was moved to middle guard (nose tackle) where his height was an advantage and he'd put on weight so he then carried about 250-255 pounds on his 6-1 frame.  He was very quick and able to flummox centers.

Julius Adams moved to the right 5-technique on the right side (DE) and the left end was manned by Mel Lunsford a Raider cast-off Fairbanks picked up in 1973 where he was mostly on the taxi-squad or hurt. Adams played at a Pro Bowl level (he was All-AFC according to the New York Daily News). He totaled 86 tackles and 8 sacks but he used his low base to shed blockers and hold his point against the run as did Lunsford. Rick Cash was relegated to the WFL. 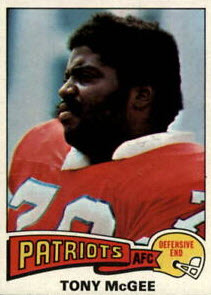 However, Fairbanks also added to the pass rush. He sent a 3rd round and 8th round pick to the Bears for Tony McGee. McGee had been a starter for the Bears but was not a complete player. Fairbanks knew that he'd need to go to a four-man line in passing downs and that Sam Hunt would not be able to cover or blitz well enough in those situations, so he needed a designated rusher and "Mac the Sack" McGee was that man.

In the secondary, he installed rookie Prentice McCray who the Lions unwisely cut to supplant  Ralph Anderson (who never again played in the NFL). One of the first moves Fairbanks had made was to acquire Jack Mildren (a former player of his in college) to play strong safety. Mildren was a fine college wishbone quarterback but had played only safety in the NFL, lacking arm strength to play quarterback.

But in playing for the Colts with players like Rick Volk and Jerry Logan and even a young Bruce Laird—solid tackling safeties (Mildren had played some corner and nickel in Baltimore as well) who were not going to let runner roam free in the secondary, Mildren learned that same style

The Patriots took the NFL by storm in the first half of the 1974 season, going 6-1 and having quality wins over the Dolphins, Rams, and Vikings. However, they failed to sustain it in the second half going 1-6 as turnovers and errors coast them several close games.

So, the 3-4 was a success. Sure, other teams had seen it before, it was not new but seeing it once in a while and not getting reps against it had to cause teams issues and the Patriots were the first NFL team to use it all season as their base.

It was so new that the press box statisticians didn't have the ability to show the correct lineups, listing linebackers as linemen for most of the season: 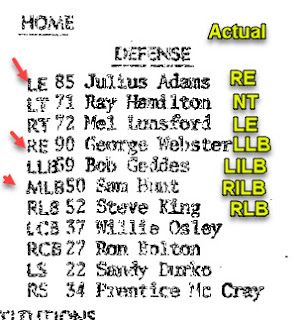 The Oilers tried to use the 3-4 full time but couldn't sustain it until mid-season when they acquired Curly Culp to play the nose. After that, they were a full-time 3-4 team. After the Oilers acquired Culp they finished the season going 6-2 and having a 7-7 record, same as the Patriots. If the Pats first half of 1974 could be matched with the second half of the Oilers you'd really have something.

As the 1970s moved on more and more teams adopted the 3-4 as a base defense until 1985 when 25 of the 28 teams used it:  the Bears (had the 46 defense), the Cowboys (the flex) and the Redskins (George Allen's defense) were the three holdouts before things swung back.

When Jimmy Johnson's college 4-3 became popular in the mid-1990s things were totally reversed with only a few teams sticking with the 3-4, the Steelers and Panthers among them.

So the parallels of Fairbanks and Johnson are that of a defense they installed becoming popular and their knowledge of the college talent stocking their teams with players to fit their teams.
Posted by John Turney at 1:02 PM