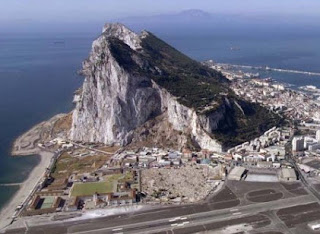 This is part seven of a rolling conversation about teams that hard remarkable improvement in their rushing defense from one year to another.

Troup on the 1969 Vikings:
While Norm Van Brocklin put his stamp on the Vikings; there is no doubt the inconsistency and the failures in 1966 led to his leaving the organization. Street and Smith's, in their 1969 edition, states the following: "A new coach, Bud Grant, has put Minnesota on the map".

When the glamor era of Norm Van Brocklin ended in 1966, the Vikings could see they had made a lot of noise and some progress but they were ripe to go either way in National League Football." Though the first two years of Grant's leadership resulted in just 11 wins, the Norsemen are now defending Central division champs.

Grant also has a vision of how he wants his defense to play. The key addition to Minnesota is quality defensive line coach Jack Patera. He has had success working with both the Rams and Giants defensive lines, and he has a real opportunity to help Bud build something special—and the 1969 Viking defense is SOMETHING SPECIAL. 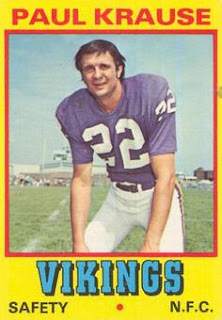 While the secondary is still rotating players, and are sure improved in zone pass defense under Bud's guidance the corners are not a key part in stopping the run. Paul Krause is asked to play deep, and is not a strong tackler, but the strong safety Karl Kassulke has grown into the position and does help on wide run plays to the tight end side of the field.

Not a lot is stated in Street & Smith's about the linebacking trio; though Wally Hilgenberg is now the full-time starter at right outside linebacker. Roy Winston is rock solid at left linebacker, and Lonnie Warwick sure does not shy away from contact. These men may not get much ink, but they perform well. 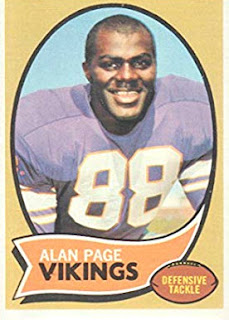 Gary Larsen is a force at left defensive tackle and is selected for the Pro Bowl. His defensive tackle companion is fast approaching stardom. Trimmed down and as such lightning-quick Alan Page can make any guard in the league looking foolish. Page is quickly learning the tricks of the trade in shedding blocks, and he is one of the best in the league in pursuit. 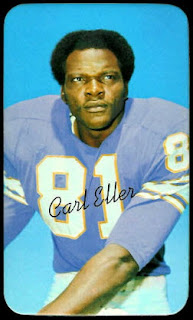 Lean experienced Jim Marshall holds his own against much bigger left offensive tackles, and he also is strong in pursuit and averaged more than a sack a game. Carl Eller rivals David Jones as the best left defensive end in the league. That alone tells a lot since the Deacon is two-time defensive player of the year.

The legendary "Purple People Eaters" allowed 1,903 yards rushing in 1968, and though the front seven demonstrated they could get the job done; that group is far from dominant. Dominance is one of the words that can be used over and over again to describe them in 1969 as they allow only 1,089 yards rushing on 337 carries.

The navy blue & burnt orange Chicago Bears have lost just TWICE to the Vikings in their previous 15 games entering 1969, and more importantly, Minnesota has lost seven straight at home against Chicago. Ouch!

Grant knows that much change, and the fact that a Comet from Kansas resides in the Chicago backfield is a real challenge. Gale Sayers has made many a Viking miss him as many of his best games have come at the expense of the purple and gold. The first seven games of '69 opponents have gained 704 yards rushing (3.8 a carry), and the Vikings are 6-1.

Sayers gained just 15 yards on 13 carries as the Vikings finally beat the Bears at the Met. Sayers is one very motivated runner in the rematch at Wrigley and is the only one hundred yard rusher allowed by Minnesota in the season (he fought for every yard he gained).

Gale's longest run in the game is 24 yards, which happens to be the longest allowed by the Vikings all season. The last seven games of the year Minnesota allows just 385 yards (55 a game) on 152 carries. The NFL champions improved 814 yards in stopping the run.

So, what happened? This one has some answers but not as many as some previous posts.

Tom Bass, the first coach hired by Paul Brown, was the defensive coordinator in 1969 and he resigned to go into the real estate business. He was replaced by Chuck Weber, a former NFL linebacker who picks off six passes in 1960 for the NFL Champion Eagles.

Weber didn't change the scheme, it was still Paul Brown's defense, but he did get better performance from the players, both the holdovers and the rookies. 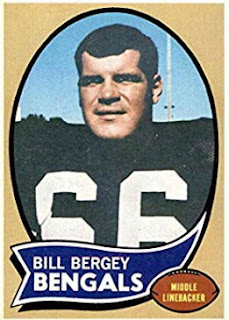 He had a fine middle 'backer, Bill Bergey, was an AFL Defensive Rookie of the Year in 1969 and he'd remain there in 1970, as did left linebacker Al Beauchamp. Beauchamp was going into his third season in 1967. He was a good, but not spectacular, linebacker who struggled in his second year, perhaps a sophomore slump?

Ken Avery was a backup in 1969 and he took over as the starter in 1970 and the 1969 starter Bill Peterson became a backup. So while there was that change in the linebacking corps it was really the same crew, but they played better, more cohesive in 1970.

Bergey with a year under his belt didn't have a slump his second year, he was better. He flowed to the ball, read his keys and didn't miss many tackles. With the changes up front, fewer blockers were getting to him on the second level freeing his scrapes to either side. 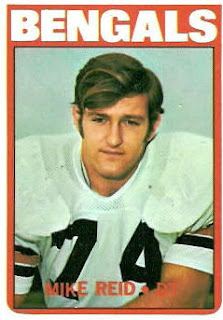 Up front, there were two upgrades. Mike Reid took over at left tackle and Ron Carpenter became the right end. Both were rookies. The two starting defensive tackles from 1969 were traded away. Bill Staley was traded (with Harry Gunner) to the Bears for Rufus Mayes and Andy Rice was shipped to the Chargers for Gary Kirner and a pick. 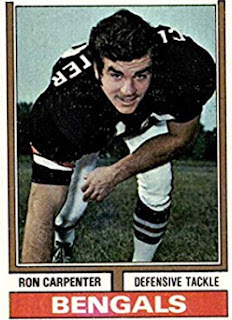 Staley was a 2nd round pick for the Bengals in 1968 so unloading him after just two seasons says a lot, it clearly wasn't working out. Staley was a starter for a few years but was average at best.  Rice was a part-time starter for the Chargers and actually ended up on the Bears in 1972 with Staley. Riche had been a good pass rusher in 1968-69 (15 total sacks) but Staley didn't mount any pressure (3 sacks in 1968-69).

Steve Chomyszak was a defensive end in 1969 where he didn't have the speed needed to play well there. He was very big for his era (6-6, 265) and Weber moved him inside and matched him with Mike Reid inside. He was stout inside, kept blockers away from his knees and made tackles in the backfield. And for good measure recorded 7½ sacks to lead the team. 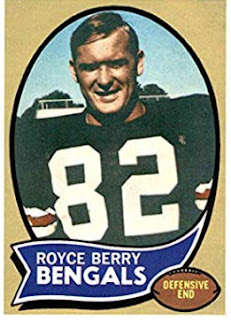 The left end remained the same—Royce Berry. Berry was an average player, better versus the run than the pass (21 career sacks in five starting seasons with the Bengals). When you watch Bengals film Berry is the guy who gets close to the QB but cannot close with the hit, knockdown or sack. "Warning track power", is what Jack Youngblood calls it. But he had some size (6-4, 250) and ability to hold the point of attack. So, with a new cast, he does much better as an overall defender. He recorded six sacks (a career high) and was solid enough versus the run and even picked up four fumbles and took two of them back for touchdowns.

Reid was an active, dynamic player, super-quick. He was similar to Alan Page in that respect. He did injure a knee and missed the final month of the season but his quick, penetrating style allowed for more tackles for loss for the Bengals. In nine games he recorded five sacks and had at least that many tackles for loss as well. He was key to breaking up blocking schemes and allowing the others to come in and make tackles. Not unlike Aaron Donald is now, though not to the same degree.

Ron Carpenter was more suited for tackle than end and even moved there later in his career, but when he was young he did have enough speed to be an upgrade over Chomyszak. At 261 he could hold his point but really didn't get much pass rush, but then again in 1969 Chomyszakdidn't either, so overall it was an upgrade at right end.

Nineteen seventy was not a dominant run-stopping season by the Bengals, it's not the 1976 Steelers we are posting about. They gave up 212 yards to the Redskins midseason and 191 to the Lions in week two. But, overall they allowed 110 yards per game, good for 9th in the NFL and their yards per attempt was 11th but it was a far cry from 1969 when they were last in pro football (both the AFL and NFL).